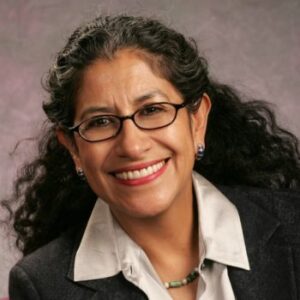 She’s been a Senior Fellow at the Opportunity Institute since it was founded in 2015, most currently leading the P-12 education project. Her work has focused on immigration, civic engagement, labor rights and education.

For the 2015-2016 academic year, she was a Visiting Scholar with the Berkeley Food Institute, a multi-disciplinary center at UC Berkeley, focused on transforming our nation’s food system. Prior to cofounding the strategic and policy consulting group NVG, LLC, in 2002, she served as Assistant to the President and Deputy Chief of Staff for President Clinton from 1998 to 2001. In that position, she focused on issues relating to immigration, civil rights, education, finance, Mexico and Latin America.

She also previously served as Administrator of the Wage and Hour Division at the US Department of Labor from 1993 to 1997. Currently, Echaveste serves on the board of directors of the California Healthcare Foundation, the New World Foundation and Mi Familia Vota. In 2009, then-Secretary Hillary Clinton appointed her as a special representative to Bolivia.

She subsequently joined the board of the US-Mexico Foundation to help develop its Mexican-American Leadership Initiative in 2010. In September 2014, President Obama nominated Ms Echaveste to be the US Ambassador to Mexico; on January 30, 2015, she asked President Obama not to resubmit her nomination to the Senate’s new leadership. Ms. Echaveste received a Bachelor of Arts in anthropology from Stanford University in 1976. In 1980, Ms. Echaveste received a Juris Doctor from the University of California at Berkeley

Staff
Tags Board of Directors